4 Most Ineffective Dog Training Methods and What to Do Instead

Many puppy owners who join our program are surprised to learn that some of the other popular dog training programs continue to promote obsolete and ineffective dog training methods and techniques. And following that advice is like sending your child to a school that still uses spanking and paddling to manage a child’s behavior.

For example, has anyone told you that you need to be the leader of your dog? Or maybe you read an article somewhere that said you need to make your dog submit to you, or you need to dominate him? This advice makes me cringe because it is BAD ADVICE.

So I’m going to share with you why that advice is NOT going to help you build a relationship with your dog, and what you CAN do to make this a loving, lasting relationship that meets both canine and human needs. I’m also going to give you some sound advice and tips on what you SHOULD do, so hang on for that part. That’s what we always want to do for our dogs – teach them what we DO want them to do.

The 4 Most Ineffective Dog Training Methods 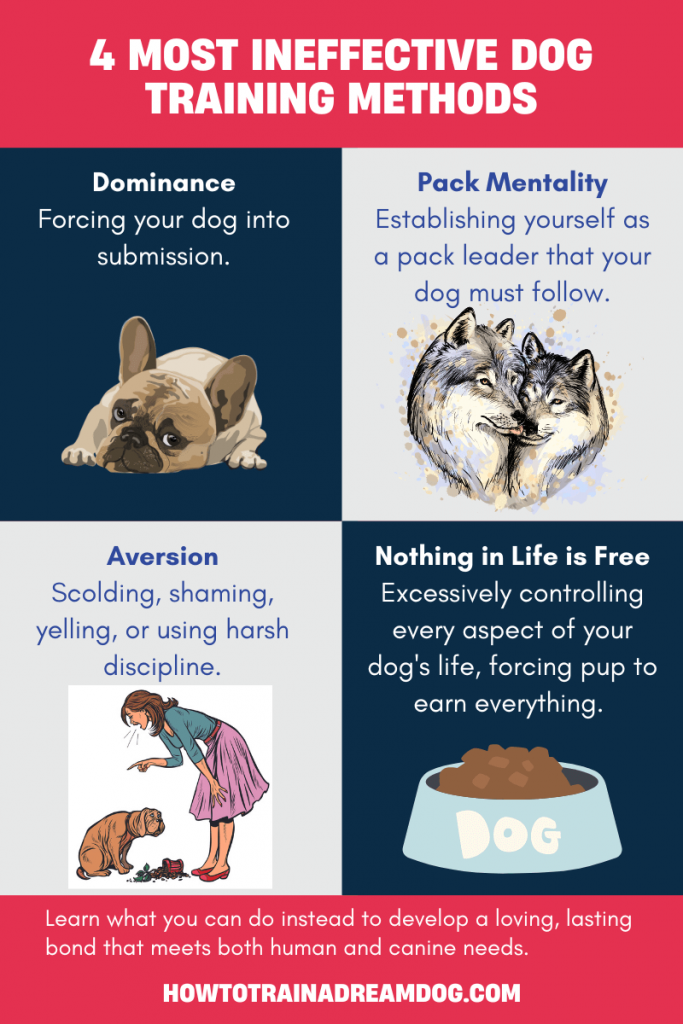 The dominance theory puts you and your dog at odds from the start by asserting that your dog and you have to compete for the alpha (or dominant) role. This dog training method is based on a study in the 1930s and 1940s by Rudolph Schenkel of wolves in captivity, which is like studying humans in concentration camps to understand human family dynamics.

As a result of his observations, the scientist concluded that adult wolves live in a hierarchical society where they are led by an alpha male and female pair, and they constantly compete for dominance. Now remember, he was observing captive wolves living in an over-populated environment where they had to compete for food and other resources necessary for their survival. This would be like taking strangers to a deserted island with limited food and water and telling them to fend for themselves. Things are going to get hairy and scary pretty quick. He then mistakenly attributed this behavior to adult wolves in the wild and later to domesticated dogs.

Take a look at your pup. Does she seem like a wolf to you? Of course not!

Comparing dogs to wolves is like saying house cats are lions or basing human behavior on apes. We may have similar behaviors but that doesn’t mean we are the same. Can you imagine getting advice from your pediatrician based on how apes care for their young? You’d say, “No thank you. I’ll consult another doctor.”

Initially, renowned wildlife biologists and researchers, like David Mech, supported Schenkel’s findings. However, after more observations of wolves in the wild, he and other contemporary researchers concluded that, instead of competing with one another, most wolf packs are more like a family, and that includes a mated pair (the adults) and offspring.

They found that adult wolves spend time caring for and teaching their young, Vying for dominance is not a priority with them. In natural wolf families, hierarchy is generational, similar to a healthy human family where parents take care of children, and children listen to, watch, and learn from adults.

Unfortunately, many dog trainers (even popular, well-respected trainers) haven’t continued their education and haven’t changed their methodology when it comes to teaching and training, so this myth still lingers.

Now that you understand the theory behind the Dominance or Alpha dog training method, here’s how to recognize it and why it’s so detrimental to you and your pup.

One technique used in dominance-based dog training to establish the owner as alpha is rolling and pinning a puppy on her back. Unfortunately, this type of negative reinforcement teaches your puppy that people can be scary and hands coming toward her are likely not something she is going to enjoy. This can lead to fear and aggression toward people. And it certainly will not build trust or help you bond with your puppy.

Maybe you’ve heard the advice that you need to act like mama dog or “pack leader” in order to gain the respect and obedience of your dog. Or maybe you were wondering if your puppy sees you or your kids as their littermates. No to both of those! There is no evidence that dogs see humans as their own species.

While it is true that dogs live in family packs, have a number of innate behaviors, and their own body language, it is also true that dogs have the innate ability to observe and learn from human gestures and verbal cues. They learn how to behave with humans by assessing each interaction, and draw conclusions about what works and what doesn’t based on your actions.

Dog training methods based on “pack mentality” advise owners to take charge of the pack by eating first, walking through doors first, occupying a higher position and worst of all, pinning the dogs into submission. They mistakenly assume that humans can recognize, interpret, and replicate canine behavior.

Let’s face it, we humans are not the best at recognizing the nuances of canine body language and dog behavior, let alone replicating it. And dog training programs that are based on the pack mentality ignore the current scientific research and subject the dog to unnecessary and sometimes cruel training methods.

If we are running into trouble with our dog, it’s not because they think you are another dog. Believe me, you do not smell like any dog they have ever met!

So now you’re thinking, “Ok Michele, if we are not the ‘Alpha’ or ‘pack leader,’ then how do we teach our dogs?“ We have found the most effective approach is to create an open line of communication between our pups and humans. I like to use the term “guide.”

You know when you show up somewhere new and there’s a big historical site or museum to explore? What do some people do? Hire a guide! Is this person going to dominate or become the alpha over you? Nope. They are going to teach and educate you. And you’ll probably, hopefully enjoy it and learn lots of new things!

Puppies don’t come equipped with an understanding of human behaviors or expectations. Our job is to teach our pups the rules for living in our home and build the behaviors that we want to see from them over and over using positive reinforcement.

Training programs that use aversion methods like punishment, deference, and fear do nothing to teach your dog the behaviors you want and do not produce a mentally, emotionally, and behaviorally healthy dog.

We want our puppies to learn new skills and positive behaviors so they can grow into healthy, happy, well-mannered lifelong companions and enjoyable members of our families.

Nothing In Life Is Free

With the “Nothing In Life Is Free” dog training method, the owner has ultimate control and the dog must earn EVERYTHING it needs or wants. And it deprives dogs of innate behaviors like digging, chasing, sniffing, shredding, chewing, jumping, and foraging.

Dogs must be enriched and healthy in order to thrive. Positive training encourages a diversity of behaviors in order to have a healthy dog. Otherwise, when we discourage our dogs from engaging in species-specific behaviors, we see these behaviors pop up in destructive and potentially harmful ways later on.

So the trick is to provide appropriate ways for our pups to engage in these innate behaviors. By providing enrichment activities that focus on positive outlets for species-specific behaviors like pits to dig in, flirt poles to chase, and decompression walks for sniffing, then we cut down on the chance that our pup will do those things when we don’t want them to.

We use a positive, relationship-based training approach in our 30 Days to Puppy Perfection course, where we teach our students how to be a good guide for their puppies and how to:

For example, most people don’t want their dogs to engage in counter surfing – climbing up on counters or the dining room table to snatch a treat from unattended food. Foraging for food is an innate behavior for which we can provide positive outlets as follows.

This approach has taught your pup that staying on the ground results in treats and positive attention. By managing the environment, your puppy also has not practiced jumping up on counters for food, so you have not unintentionally reinforced the undesired behavior of counter surfing. And your puppy still has the opportunity to jump and forage in appropriate contexts if jumping and foraging are activities that she enjoys!

There’s a little more to properly address counter surfing than that, but you get the idea.

Here’s a lightning round recap of everything we covered today:

That’s all! It doesn’t sound so hard once I break it down, right?

If you’re wondering, “Where do I begin?” I’d recommend my FREE New Puppy Starter Kit (sign up to get started below)! Or, if you’re ready to dig right in and do a deeper dive using the most effective dog training methods, purchase the online puppy training course, 30 Days to Puppy Perfection. Getting started is easy!

After spending 20 years helping families with their dogs face to face as a professional dog trainer, Michele realized that so much of what she knows could be shared with families everywhere - in a way that actually works. People sometimes think their dog is just SUPER difficult because the advice they’ve gotten was incomplete, confusing or just wrong. So she set out to help. Michele loves training dogs because of the impact that it has on the families she gets to help. The peace and joy they get from being able to enjoy their dog LISTENING. Besides teaching classes, helping private clients and running seminars, Michele is also a foodie and fantasizes about being a food critic or secret shopper for restaurants. Talk to her about food and your instant best friends.

We use cookies on our website to give you the most relevant experience by remembering your preferences and repeat visits. By clicking “Accept”, you consent to the use of ALL the cookies.
Do not sell my personal information.
Cookie SettingsAccept
Manage consent

This website uses cookies to improve your experience while you navigate through the website. Out of these, the cookies that are categorized as necessary are stored on your browser as they are essential for the working of basic functionalities of the website. We also use third-party cookies that help us analyze and understand how you use this website. These cookies will be stored in your browser only with your consent. You also have the option to opt-out of these cookies. But opting out of some of these cookies may affect your browsing experience.
Necessary Always Enabled
Necessary cookies are absolutely essential for the website to function properly. These cookies ensure basic functionalities and security features of the website, anonymously.
Functional
Functional cookies help to perform certain functionalities like sharing the content of the website on social media platforms, collect feedbacks, and other third-party features.
Performance
Performance cookies are used to understand and analyze the key performance indexes of the website which helps in delivering a better user experience for the visitors.
Analytics
Analytical cookies are used to understand how visitors interact with the website. These cookies help provide information on metrics the number of visitors, bounce rate, traffic source, etc.
Advertisement
Advertisement cookies are used to provide visitors with relevant ads and marketing campaigns. These cookies track visitors across websites and collect information to provide customized ads.
Others
Other uncategorized cookies are those that are being analyzed and have not been classified into a category as yet.
SAVE & ACCEPT