Do you tell your dog to “be quiet” often?

How many times have you told your dog to “quiet down,” “knock it off,” or “shut up!” only to hear continual barking. Your dog just won’t stop barking when you give them the cue “be quiet.”

Many dogs bark because they’ve been accidentally rewarded for their barking. I know what you're thinking… “No way, I would never reward my dog for barking unless someone was breaking into the house.”

What I mean is that somehow your dog’s barking got them what they wanted. Their barking made someone go away or got someone to toss their ball.

A dog's annoying barking at people or cars passing by has learned that their barking is effective in getting people to leave their property. What your dog doesn’t know or understand is that people passing by did not leave because your dog barked. The people left because they were already headed somewhere else that just happened to pass by your house.

This concept is similar to my “mailman theory.” The mailman comes by your house every day at the same time. Your dog barks at the mailman and learns that their continual barking makes the mailman leave. Each day your dog gets reinforcement for their great effort at keeping the “intruder” away. Your dog doesn’t understand that the mailman went to the next house because that’s part of their route and not because your dog’s barking scared them away. 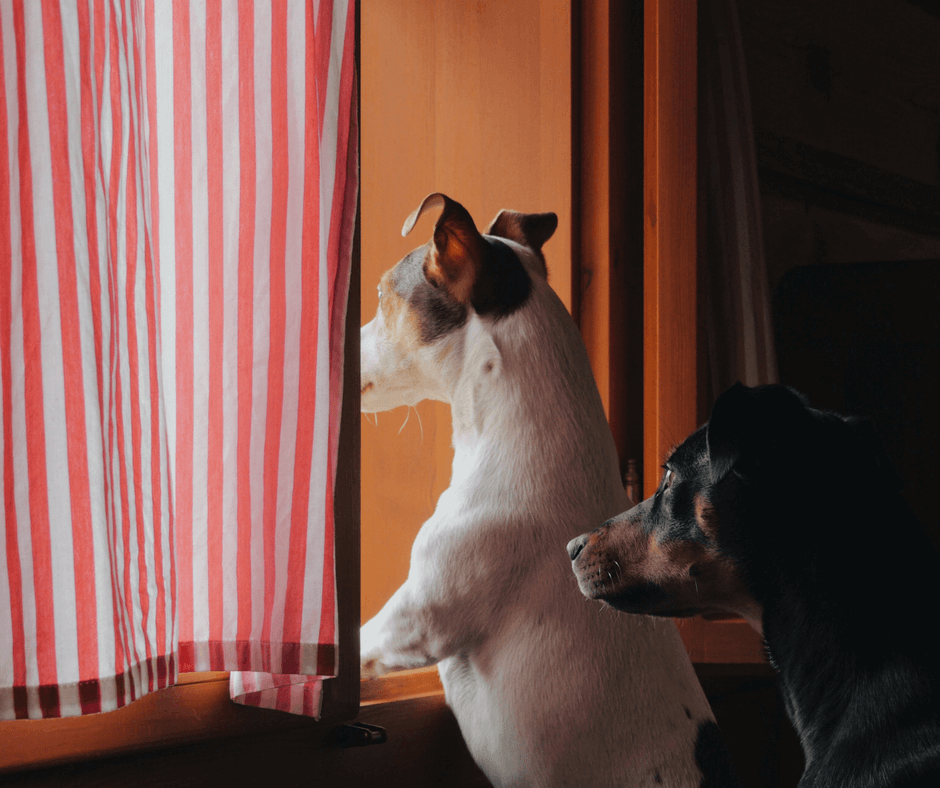 Do not allow your dog to bark at strangers, cars or any delivery service passing by outside. Keep your dog's annoying barking away from the windows or doors. Close the blinds or curtains on the windows that your dog frequently stares out and barks at. You may have to put your dog in a crate so they don’t find alternate doors or windows to run to and bark at.

Sometimes you have to take away the opportunity for your dog to bark, and the only way you can do that is to either remove your dog from the area where they can look out the window and bark or close the curtains or blinds so your dog can’t see outside any longer.

Keep in mind a dog that doesn’t get enough mental and physical exercise throughout the day will want to bark even more. They are trying to find outlets to release all their pent-up energy.

For more information on exercising your dog, check out this three-part series with 15 different games and exercises you can do with your dog indoors.

Don't forget to check out part 2 of this blog series for even more helpful tips to stop all the barking: Stop Your Dog's Annoying Barking (Part 2)

Whatever you do, don’t yell at your dog to “be quiet” while they are barking. In the next section, you’ll learn why that won’t work and what to do to get your dog to stop barking on cue.

What does your dog bark at that frustrates and annoys you the most? After spending 20 years helping families with their dogs face to face as a professional dog trainer, Michele realized that so much of what she knows could be shared with families everywhere - in a way that actually works. People sometimes think their dog is just SUPER difficult because the advice they’ve gotten was incomplete, confusing or just wrong. So she set out to help. Michele loves training dogs because of the impact that it has on the families she gets to help. The peace and joy they get from being able to enjoy their dog LISTENING. Besides teaching classes, helping private clients and running seminars, Michele is also a foodie and fantasizes about being a food critic or secret shopper for restaurants. Talk to her about food and your instant best friends.

We use cookies on our website to give you the most relevant experience by remembering your preferences and repeat visits. By clicking “Accept”, you consent to the use of ALL the cookies.
Do not sell my personal information.
Cookie SettingsAccept
Manage consent

This website uses cookies to improve your experience while you navigate through the website. Out of these, the cookies that are categorized as necessary are stored on your browser as they are essential for the working of basic functionalities of the website. We also use third-party cookies that help us analyze and understand how you use this website. These cookies will be stored in your browser only with your consent. You also have the option to opt-out of these cookies. But opting out of some of these cookies may affect your browsing experience.
Necessary Always Enabled
Necessary cookies are absolutely essential for the website to function properly. These cookies ensure basic functionalities and security features of the website, anonymously.
Functional
Functional cookies help to perform certain functionalities like sharing the content of the website on social media platforms, collect feedbacks, and other third-party features.
Performance
Performance cookies are used to understand and analyze the key performance indexes of the website which helps in delivering a better user experience for the visitors.
Analytics
Analytical cookies are used to understand how visitors interact with the website. These cookies help provide information on metrics the number of visitors, bounce rate, traffic source, etc.
Advertisement
Advertisement cookies are used to provide visitors with relevant ads and marketing campaigns. These cookies track visitors across websites and collect information to provide customized ads.
Others
Other uncategorized cookies are those that are being analyzed and have not been classified into a category as yet.
SAVE & ACCEPT
Share via
Facebook
Twitter
LinkedIn
Mix
Pinterest
Tumblr
Skype
Buffer
Pocket
VKontakte
Parler
Xing
Reddit
Flipboard
MySpace
Delicious
Amazon
Digg
Evernote
Blogger
LiveJournal
Baidu
MeWe
NewsVine
Yummly
Yahoo
WhatsApp
Viber
SMS
Telegram
Facebook Messenger
Like
Email
Print
Copy Link
Copy link
CopyCopied